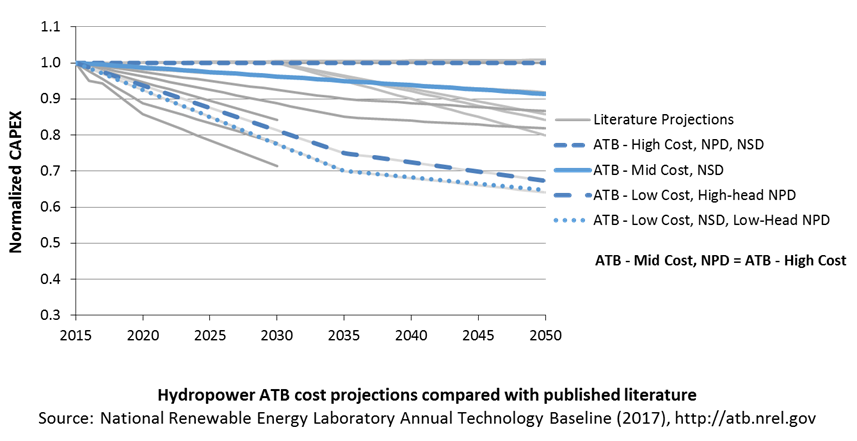 The Mid and Low cost cases use a mix of inputs based on EIA technological learning assumptions, input from a technical team of Oak Ridge National Laboratory researchers, and the experience of expert hydropower consultants. Estimated 2035 cost levels are intended to provide magnitude of order cost reductions deemed to be at least conceptually possible, and they are meant to stimulate a broader discussion with the hydropower industry and its stakeholders that will be necessary to the future of cost reduction in the industry. Cost projections were derived independently for NPD and NSD technologies.

For context, ATB cost projections are compared to the literature, which represents 7 independent published studies and 11 cost projection scenarios within these studies. Cost reduction literature for hydropower is limited with several studies projecting no change through 2050. It is unclear whether (1) this represents a deliberate estimate of no future change in cost or (2) no estimate has been made.

Hydropower investment costs are very site specific and vary with type of technology. Literature was reviewed to attempt to isolate perceived CAPEX reduction for resources of similar characteristics over time (e.g., estimated cost to develop the same site in 2015, 2030, and 2050 based on different technology, installation, and other technical aspects). Some studies reflect increasing CAPEX over time. These studies were excluded from the ATB based on the interpretation that rising costs reflect a transition to less attractive sites as the better sites are used earlier.

Literature estimates generally reflect hydropower facilities of sizes similar to those represented in U.S. resource potential (i.e., they exclude estimates for very large facilities). Due to limited sample size, all projections are analyzed together without distinction between types of technology. Note that although declines are shown on a percentage basis, the reduction is likely to vary with initial capital cost. Large reductions for moderately expensive sites may not scale to more expensive sites or to less expensive sites. Projections derived for the Hydropower Vision study for different technologies (Low Head NPD, High Head NPD, and NSD) address this simplification somewhat.