ATB projections were derived from the results of a survey of 163 of the world's wind energy experts (Wiser et al. 2016). The survey was conducted to gain insight into the possible future cost reductions, the source of those reductions, and the conditions needed to enable continued innovation and lower costs (Wiser et al. 2016). The expert survey produced three cost reduction scenarios associated with probability levels of 10%, 50%, and 90% of achieving LCOE reductions by 2030 and 2050. In addition, the scenario results include estimated changes to CAPEX, O&M, capacity factor, project life, and weighted average cost of capital (WACC) by 2030.

For the ATB, three different projections were adapted from the expert survey results for scenario modeling as bounding levels:

Expert survey estimates were normalized to the ATB Base Year starting point in order to focus on projected cost reduction instead of absolute reported costs. The percent reductions in LCOE by 2020, 2030, and 2050 from the expert survey's Median and Low scenarios are implemented as the ATB Mid and Low cost scenarios. This is accomplished by utilizing survey estimates for changes to capacity factor and O&M costs by 2030 and 2050. The corresponding CAPEX value to achieve the overall LCOE reduction is computed. The percent reduction in LCOE by 2030 and by 2050 was applied equally across all TRGs. The overall reduction in LCOE by 2050 for the Mid cost scenario is 35% and for the Low cost scenario is 53%. 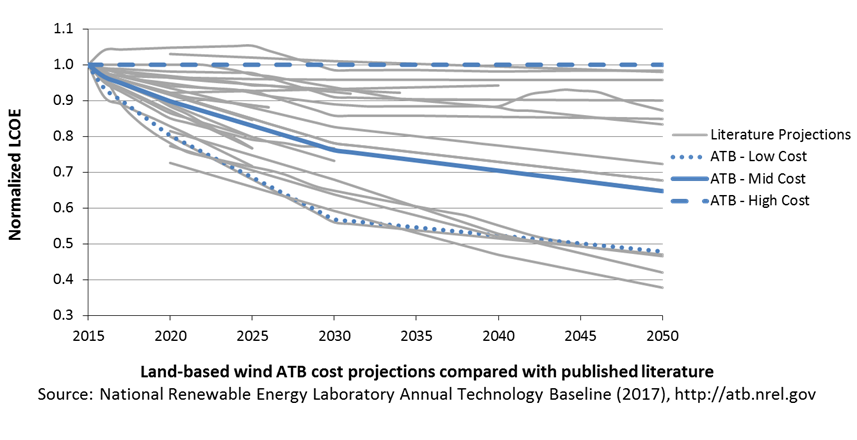