ATB projections were derived from the results of a survey of 163 of the world's wind energy experts (Wiser et al. 2016). The survey was conducted to gain insight into the possible future cost reductions, the source of those reductions, and the conditions needed to enable continued innovation and lower costs (Wiser et al. 2016). The expert survey produced three cost reduction scenarios associated with probability levels of 10%, 50%, and 90% of achieving LCOE reductions by 2030 and 2050. In addition, the scenario results include estimated changes to CAPEX, O&M, capacity factor, project life, and weighted average cost of capital (WACC) by 2030.

For the ATB, three different projections were adapted from the expert survey results for scenario modeling as bounding levels:

A broad sample of cost of wind energy projections are shown to provide context for the ATB High, Mid, and Low cost projections. In general, the ATB Mid cost projection reflects median values of the full population of literature; the ATB Low cost projection is similar to the low bound of the literature in the later years. While some published studies as well as recent project announcements for European projects to be installed by 2020 suggest significant near-term cost reduction, it is likely that the United States will lag due to a lack of industry infrastructure. Because the expert survey provided LCOE Projections that are related to each other in terms of probability, these scenarios are used in the ATB to represent two distinct levels of technology improvement pathways. 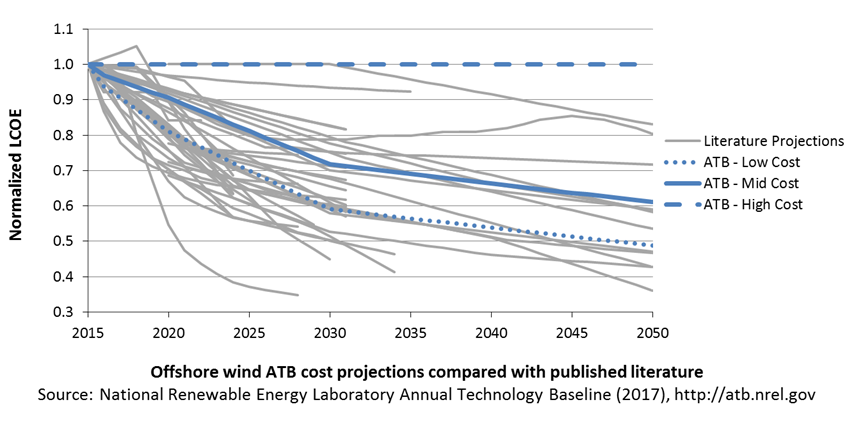