Wind resource is prevalent throughout the United States but is concentrated in the central states. Total land-based wind technical potential exceeds 10,000 GW (almost tenfold current total U.S. electricity generation capacity), which would use the wind resource on 3.5 million km2 of land area but would disrupt or exclude other uses from a fraction of that area. This technical potential does not include standard exclusions-lands such as federally protected areas, urban areas, and water. Resource potential has been expanded from approximately 6,000 GW (DOE (2015)) by including locations with lower wind speeds to provide more comprehensive coverage of U.S. land areas where future technology may improve economic potential).

Renewable energy technical potential, as defined by Lopez et al. 2012, represents the achievable energy generation of a particular technology given system performance, topographic limitations and environmental and land-use constraints. The primary benefit of assessing technical potential is that it establishes an upper-boundary estimate of development potential. It is important to understand that there are multiple types of potential-resource, technical, economic, and market (Lopez et al. 2012; NREL, "Renewable Energy Technical Potential ").

The resource potential is calculated by using over 130,000 distinct areas for wind plant deployment that cover over 3.5 million km2. The potential capacity is estimated to total over 10,000 GW if a power density of 3 MW/km2 is assumed. 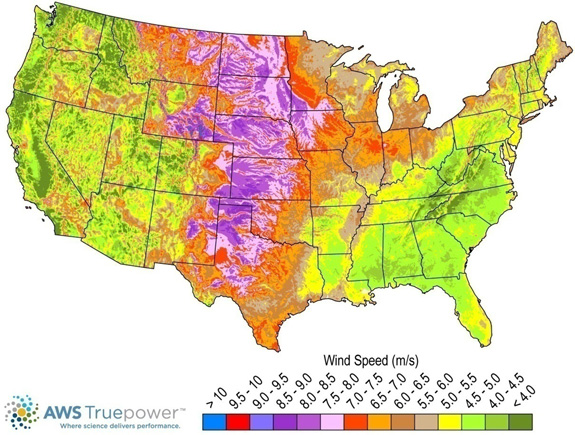 Map of the land-based wind resource in the contiguous United States
Source: NREL (2012)

For each of the 130,000 distinct areas, an LCOE is estimated taking into consideration site-specific hourly wind profiles. Representative wind turbines derived from annual installation statistics are associated with a range of average annual wind speed based on actual historical wind plant installations This method is described in Moné et al. (2017) and summarized below.

For representation in the ATB, the full resource potential, reflecting the 130,000 individual areas, was divided into 10 techno-resource groups (TRGs). The capacity-weighted average CAPEX, O&M, and capacity factor for each group is presented in the ATB.

More specifically, future year projections for the Mid cost scenario are derived from the estimated cost reduction potential for land-based wind technologies as calculated from an elicitation of over 160 wind industry experts (Wiser et al. (2016)). Their study produced three different cost reduction pathways, and the median estimates for LCOE reduction are used for ATB Mid cost scenario. Future year projections for the Low cost scenario are derived from the estimated cost reduction potential considering a collection of intelligent and novel technologies that comprise next-generation wind turbine and plant technology and characterized as System Management of Atmospheric Resource through Technology, or SMART strategies (Dykes et al. (2017)). In both scenarios, the overall LCOE reductions resulting from these analyses were used as the basis for the ATB projections. Accordingly, all three cost elements - CAPEX, O&M, and capacity factor-should be considered together; individual cost element projections are derived.