Concentrating solar power (CSP) technology is assumed to be molten-salt power towers. Thermal energy storage (TES) is accomplished by storing hot molten salt in a two-tank system, which includes a hot-salt tank and a cold-salt tank. Stored hot salt can be dispatched to the power block as needed, regardless of solar conditions, to continue power generation and allow for electricity generation after sunlight hours. In the ATB, CSP plants with 10 hours of TES are illustrated. Ten hours is the amount of storage at the Crescent Dunes CSP plant in Nevada, which is representative of most new molten-salt power tower projects.

Solar resource is prevalent throughout the United States, but the Southwest is particularly suited to CSP plants. The direct normal irradiance (DNI) resource across the Southwest, which is some of the best in the world, ranges from 6.0 to over 7.5 kWh/m2/day (NREL 2018). The raw resource technical potential of seven western states (Arizona, California, Colorado, Nevada, New Mexico, Utah, and Texas) exceeds 11,000 GW-which is almost tenfold current total U.S. electricity generation capacity-considering regions in these states with an annual average resource > 6.0 kWh/m2/day and after accounting for exclusions such as land slope (> 1%), urban areas, water features, and parks, preserves, and wilderness areas (Mehos, Kabel, and Smithers (2009)). 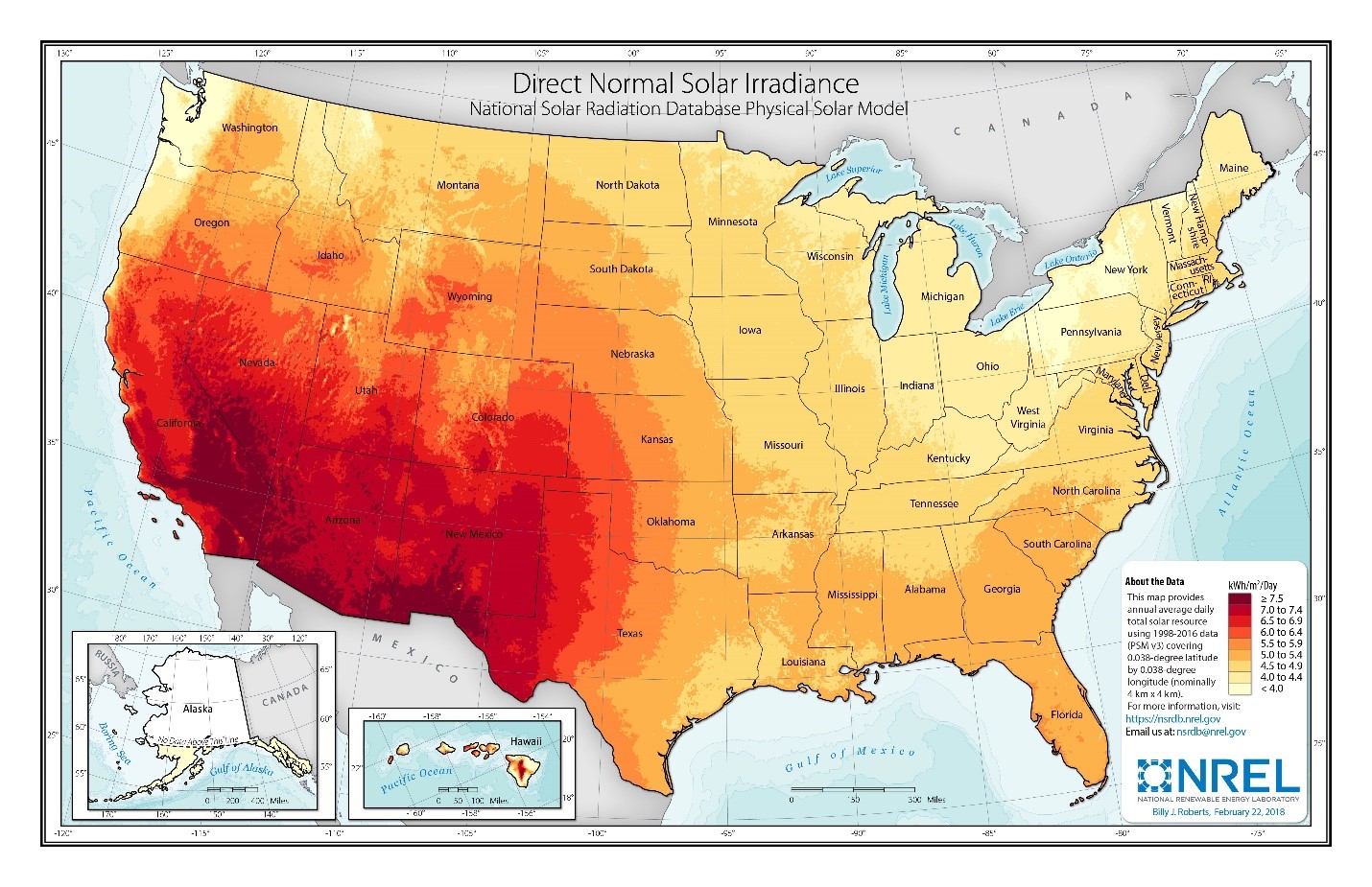 Renewable energy technical potential, as defined by Lopez et al. 2012, represents the achievable energy generation of a particular technology given system performance, topographic limitations, and environmental and land-use constraints. The primary benefit of assessing technical potential is that it establishes an upper-boundary estimate of development potential. It is important to understand that there are multiple types of potential-resource, technical, economic, and market (Lopez at al. 2012; NREL, Renewable Energy Technical Potential").

The CSP costs originated from a NREL survey leading to updated cost estimates in SAM 2017.09.05. These 2017 costs were deflated to the ATB Base Year of 2016 via the consumer price index. The SAM 2017 costs translate to costs in 2020 in the ATB due to the three-year construction period. (SAM costs are based on the project announcement year, while the ATB is based on the plant commissioning year).

Details as in the sheet: SolarReserve. 2018. "Sandstone." Project overview. http://www.solarreserve.com/en/global-projects/csp/sandstone.