Simple-cycle gas turbines can achieve 20%-35% energy conversion efficiency depending on the type and design of the system. Aeroderivative turbines are typically more flexible but more expensive than their industrial gas turbine counterparts. Combined-cycle natural gas plants include a heat recovery steam generator that uses the hot exhaust from the combustion turbine to generate steam. That steam can then be used to generate additional electricity using a steam turbine. Combined-cycle natural gas plants typically have efficiencies ranging from 50%-60%, and R&D targets have been set to achieve even higher efficiencies. Combined-cycle plants can be built using a variety of configurations, such as a single combustion turbine and steam turbine connected to a single generator (1x1) or two combustion turbines coupled with one steam turbine (2x1) (DOE "How Gas Turbine Power Plants Work").

Renewable energy technical potential, as defined by Lopez et al. 2012, represents the achievable energy generation of a particular technology given system performance, topographic limitations, and environmental and land-use constraints. Technical resource potential corresponds most closely to fossil reserves, as both can be characterized by the prospect of commercial feasibility and depend strongly on available technology at the time of the resource assessment. Natural gas reserves in the United States are assessed by the United States Geological Survey (USGS, National Oil and Gas Assessment).

This section focuses on large, utility-scale natural gas plants. Distributed-scale turbines may be included in a future version of the ATB. 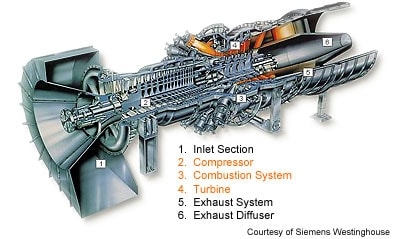 Because natural gas plants are well-known and perform close to their optimal performance, the EIA capital expenditures (CAPEX) projections decline at the minimum learning rate for the gas-fired technologies, resulting in incremental improvement over time that progresses slightly more quickly than inflation.

The one exception is natural gas combined cycle (CC) with carbon capture and storage (CCS). The DOE Office of Fossil Energy and the National Energy Technology Laboratory conduct research on reducing the costs and increasing the performance of CCS technology, and costs are expected to decline over time at a higher learning rate than the more mature gas-CT and gas-CC technologies. 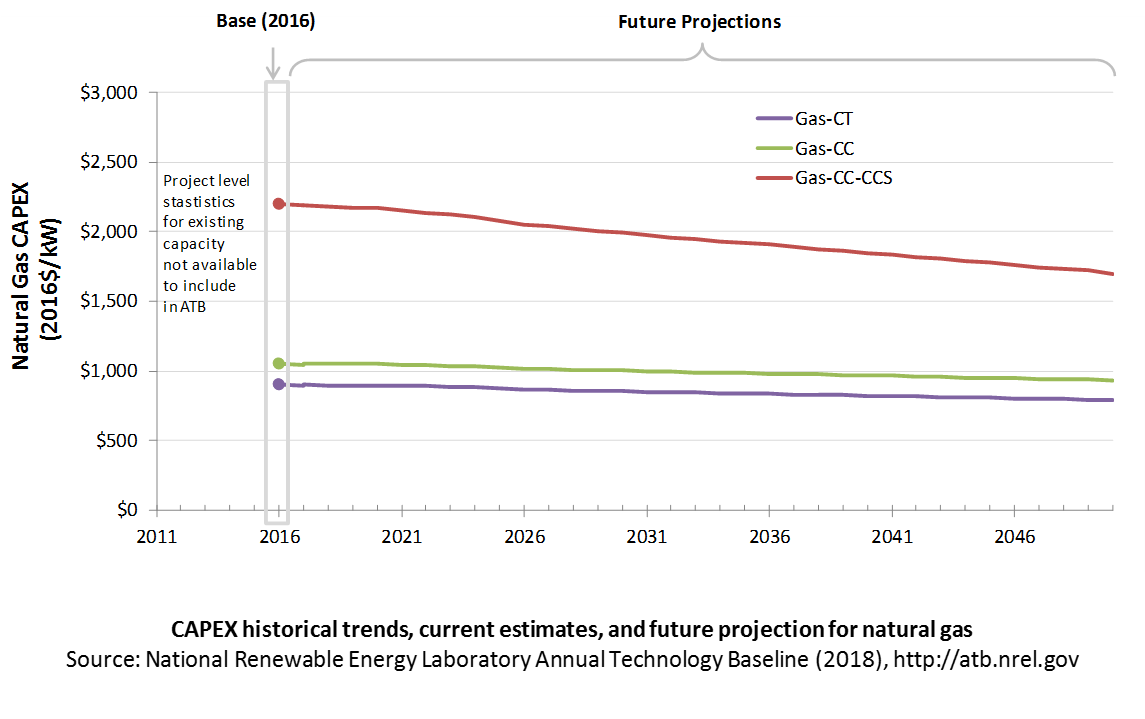 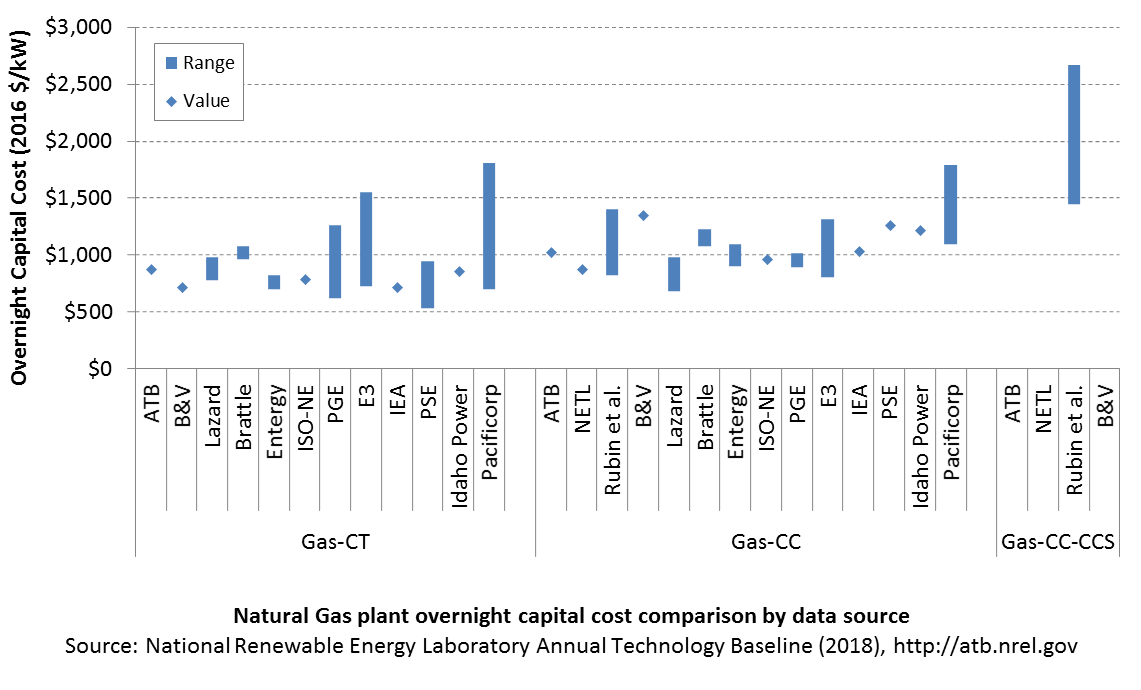 Fuel costs are taken from EIA (2017). EIA reports two types of gas-CT and gas-CC technologies in EIA's Annual Energy Outlook: advanced (H-class for gas-CC, F-class for gas-CT) and conventional (F-class for gas-CC, LM-6000 for gas-CT). Because we represent a single gas-CT and gas-CC technology in the ATB, the characteristics for the ATB plants are taken to be the average of the advanced and conventional systems as reported by EIA. For example, the OCC for the gas-CC technology in the ATB is the average of the capital cost of the advanced and conventional combined cycle technologies from the Annual Energy Outlook. Future work aims to improve the representation of the various natural gas technologies in the ATB. The CCS plant configuration includes only the cost of capturing and compressing the CO2. It does not include CO2 delivery and storage.

In the ATB, CAPEX represents each type of gas plant with a unique value. Regional cost effects associated with labor rates, material costs, and other regional effects as defined by EIA 2016a expand the range of CAPEX. Unique land-based spur line costs based on distance and transmission line costs are not estimated. The following figure illustrates the ATB representative plant relative to the range of CAPEX including regional costs across the contiguous United States. The ATB representative plants are associated with a regional multiplier of 1.0. 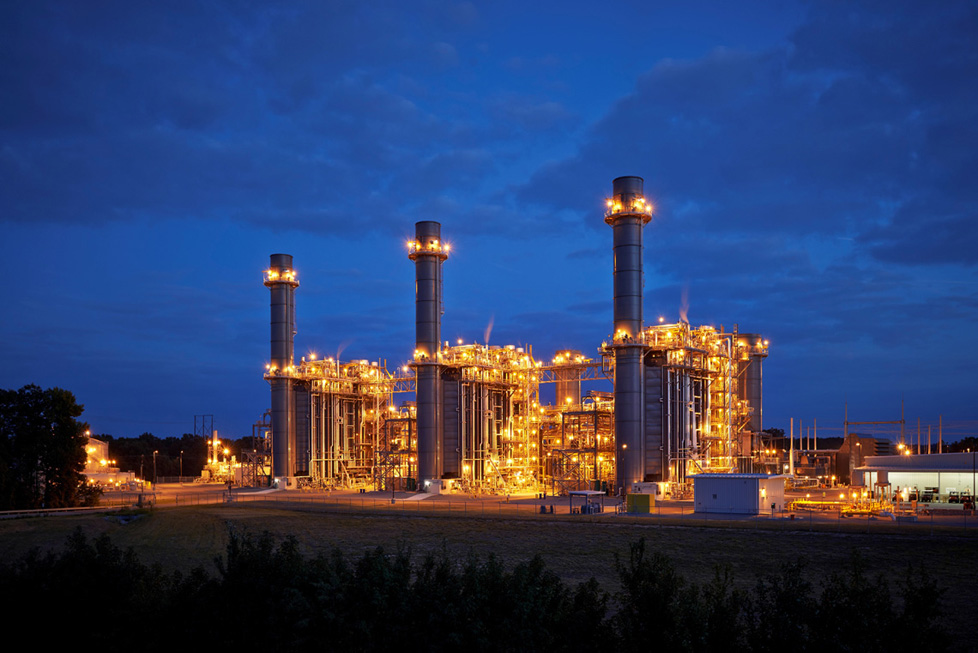 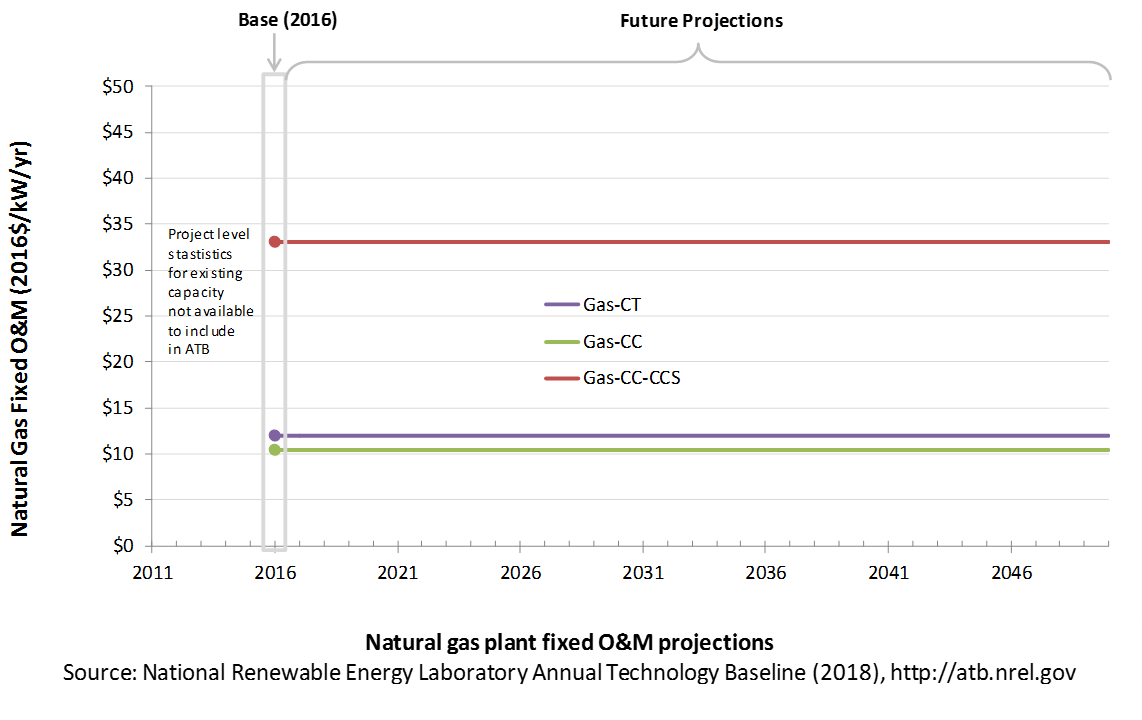 Gas-CC with CCS has not yet been built. It is expected to be a baseload unit. 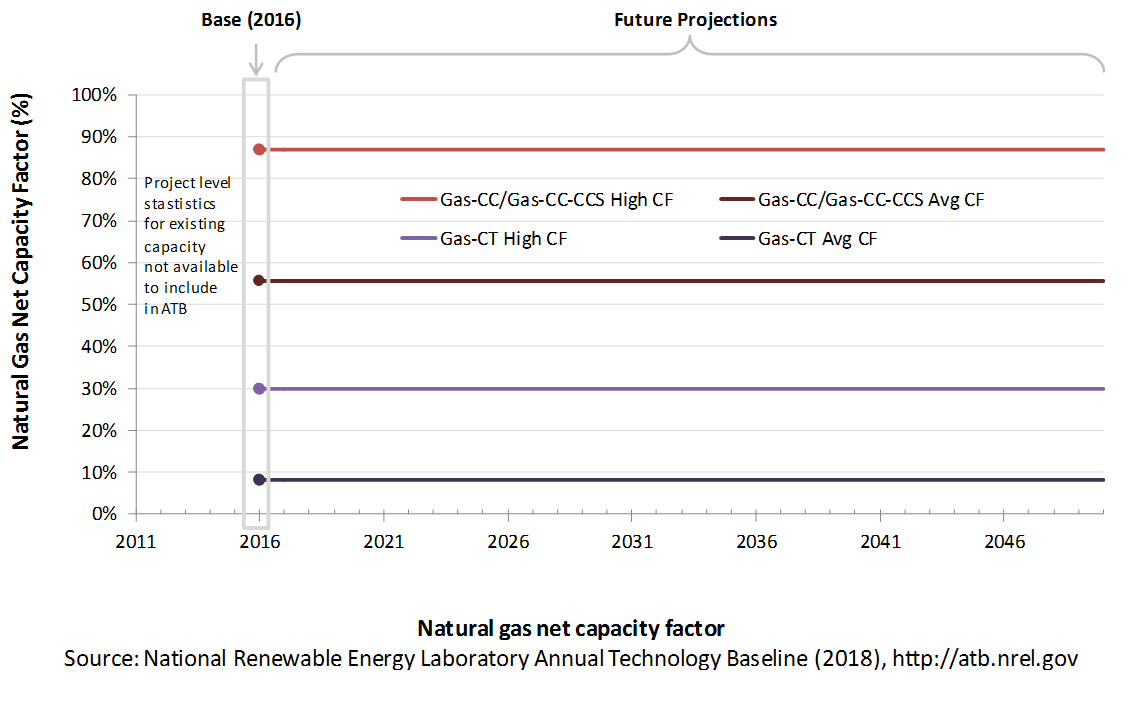 The following three figures illustrate LCOE, which includes the combined impact of CAPEX, O&M, and capacity factor projections for natural gas across the range of resources present in the contiguous United States. For the purposes of the ATB, the costs associated with technology and project risk in the U.S. market are represented in the financing costs, not in the upfront capital costs (e.g. developer fees, contingencies). An individual technology may receive more favorable financing terms outside of the U.S., due to less technology and project risk, caused by more project development experience (e.g. offshore wind in Europe), or more government or market guarantees. The R&D Only LCOE sensitivity cases present the range of LCOE based on financial conditions that are held constant over time unless R&D affects them, and they reflect different levels of technology risk. This case excludes effects of tax reform, tax credits, technology-specific tariffs, and changing interest rates over time. The R&D + Market LCOE case adds to these the financial assumptions (1) the changes over time consistent with projections in the Annual Energy Outlook and (2) the effects of tax reform, tax credits, and tariffs. The ATB representative plant characteristics that best align with those of recently installed or anticipated near-term natural gas plants are associated with Gas-CC-HighCF. Data for all the resource categories can be found in the ATB data spreadsheet. 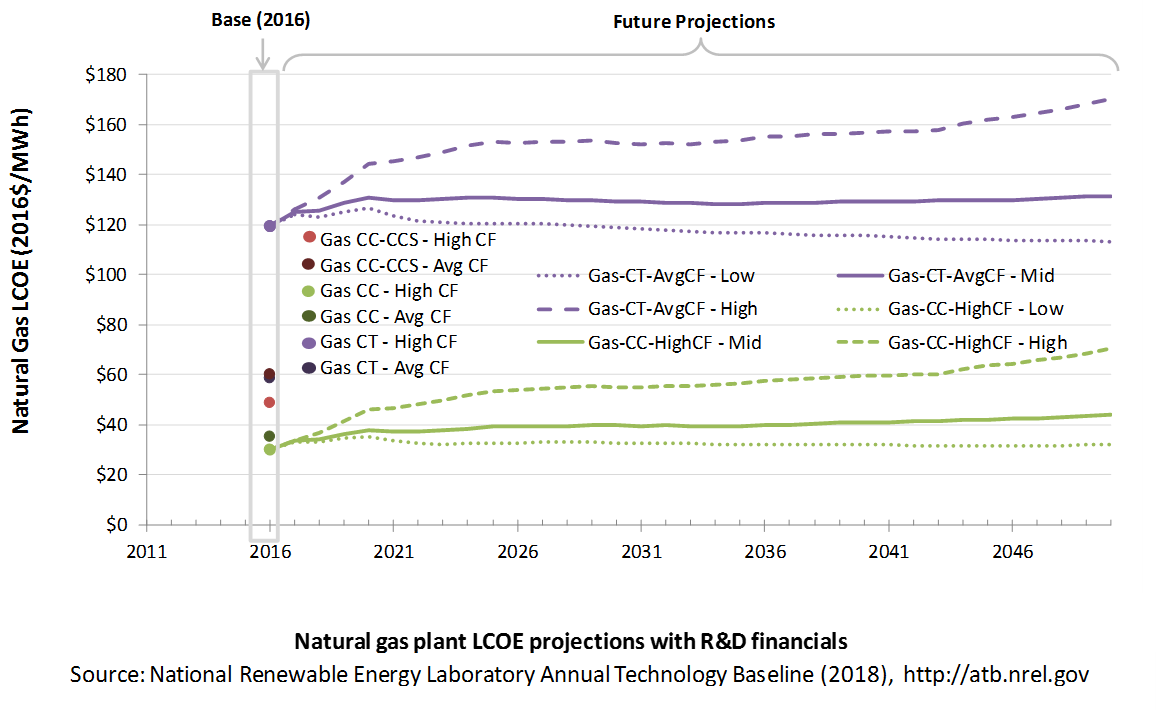 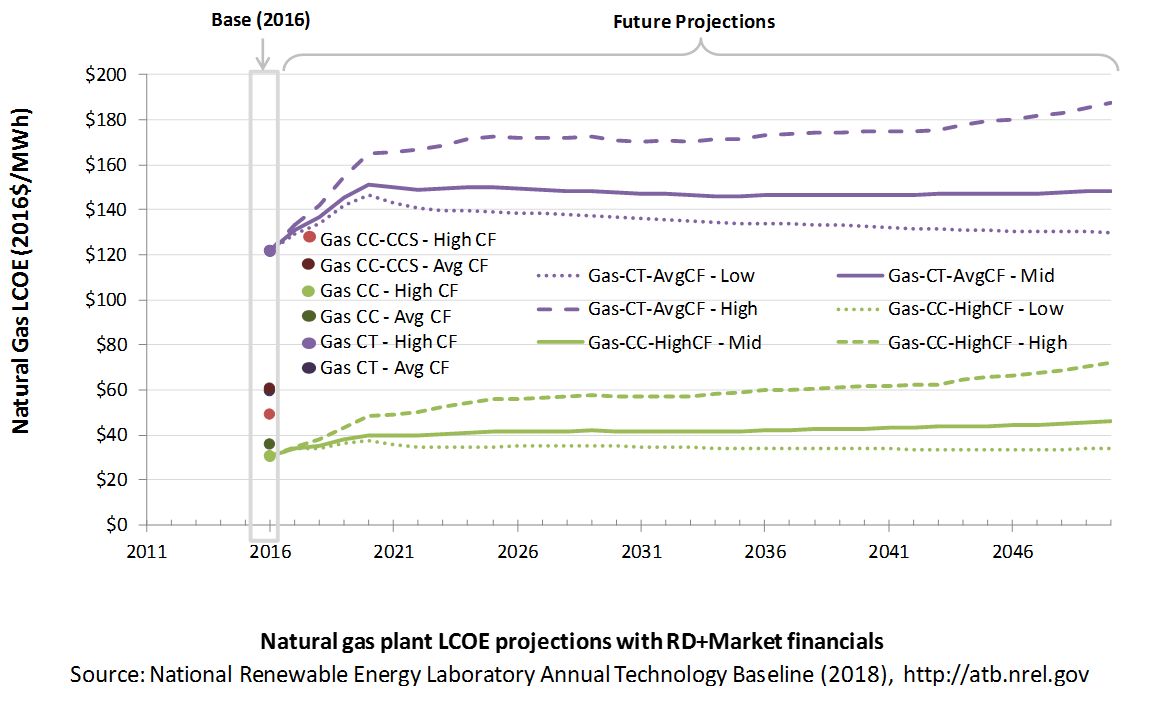 These projections do not include any cost of carbon, which would influence the LCOE of fossil units. Also, for CCS plants, the potential revenue from selling the captured carbon is not included (e.g., enhanced oil recovery operation may purchase CO2 from a CCS plant).

To estimate LCOE, assumptions about the cost of capital to finance electricity generation , and the LCOE calculations are sensitive to these financial assumptions. Three project finance structures are used within the ATB: