Nuclear power plants generate electricity in the same way as any other steam-electric power plant. Water is heated, and steam from the boiling water turns turbines and generates electricity. The main difference is that heat from a self-sustaining chain reaction boils the water in a nuclear power plant, as opposed to burning fuels in fossil fuel plants (DOE Office of Nuclear Energy "History").

Renewable energy technical potential, as defined by Lopez et al. 2012, represents the achievable energy generation of a particular technology given system performance, topographic limitations, and environmental and land-use constraints. Technical resource potential corresponds most closely to fossil reserves, as both can be characterized by the prospect of commercial feasibility and depend strongly on available technology at the time of the resource assessment. Uranium reserves in the United States are assessed by the United States Geological Survey (USGS, "Uranium Resources and Environmental Investigations").

Because nuclear plants are well-known and perform close to their optimal performance, EIA expects capital expenditures (CAPEX) will incrementally improve over time and slightly more quickly than inflation. 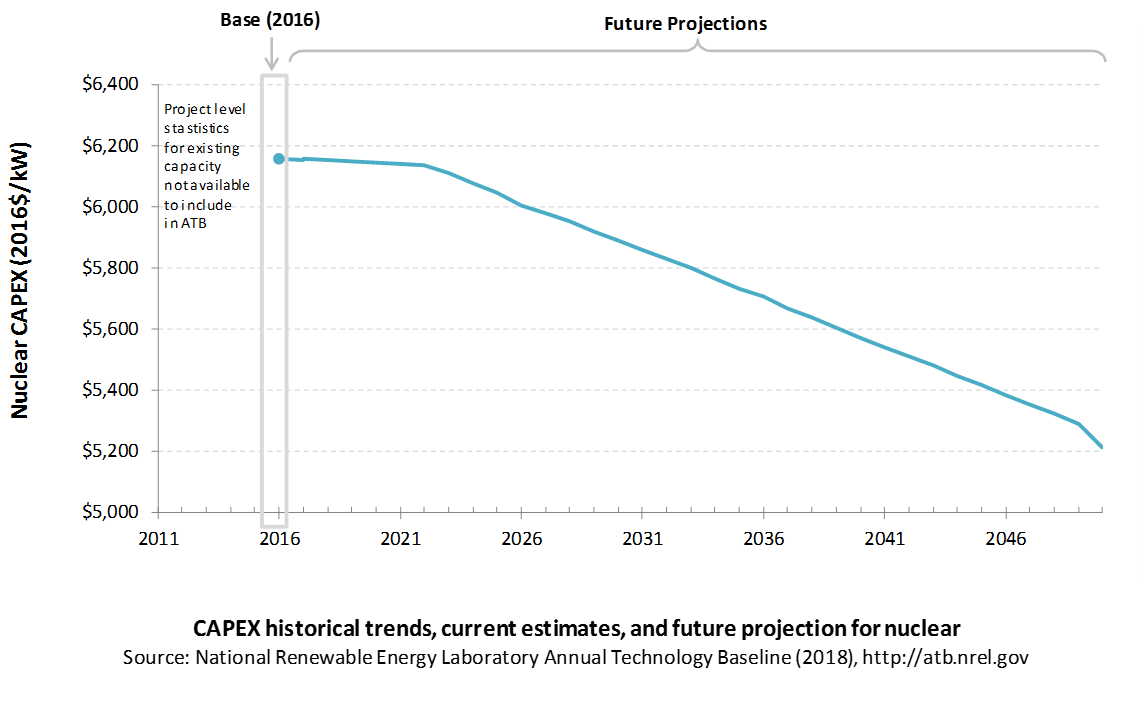 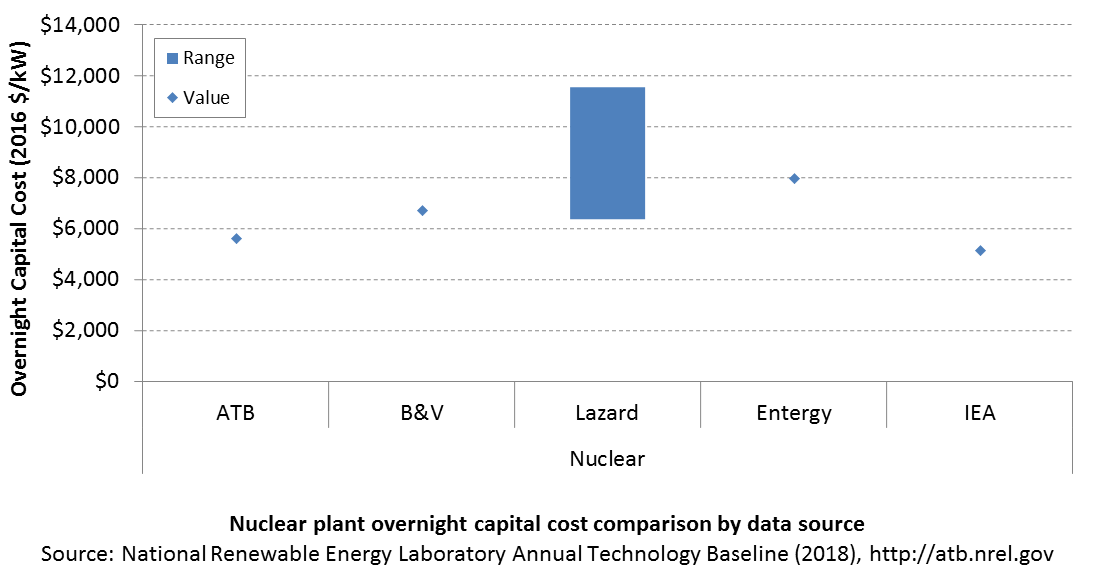 ATB cost numbers are for a brownfield nuclear facility.
Data sources include the ATB, B& V (2012), Entergy (2015), IEA (2015), and Lazard (2016).
All sources have been normalized to the same dollar year. Costs vary due to differences in system design, methodology, and plant cost definitions.

In the ATB, CAPEX represents each type of nuclear plant with a unique value. Regional cost effects associated with labor rates, material costs, and other regional effects as defined by EIA 2016a expand the range of CAPEX (Plant × Region). Unique land-based spur line costs based on distance and transmission line costs are not estimated. The following figure illustrates the ATB representative plant relative to the range of CAPEX including regional costs across the contiguous United States. The ATB representative plants are associated with a regional multiplier of 1.0. 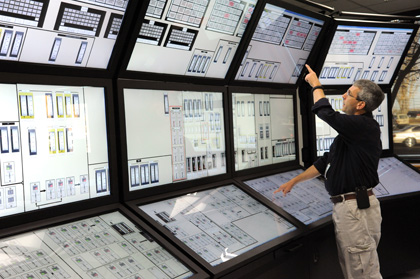 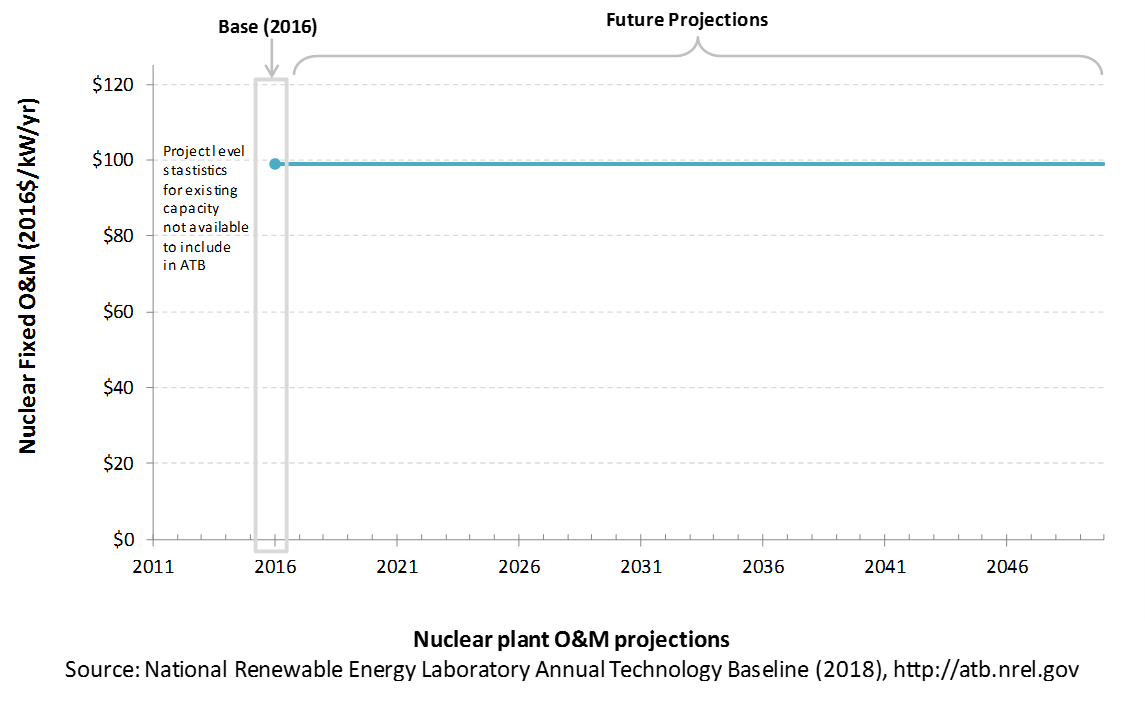 The capacity factor of nuclear units is generally very high (> 85%) as they are typically always online except when undergoing maintenance or refueling (NEI "US Nuclear Capacity Factors").

In the United States, nuclear power plants are baseload plants with steady capacity factors. They need to change out their uranium fuel rods about every 24 months. After 18-36 months, the used fuel is removed from the reactor (World Nuclear Association "The Nuclear Fuel Cycle"). The average fueling outage duration in 2013 was 41 days; from 1990 to 1997, the refueling days ranged from 66 to 106, so improvements have helped capacity factors (NEI, "US Nuclear Refueling Outage Days"). See also NEI ("US Nuclear Power Plants: General U.S. Nuclear Info"). 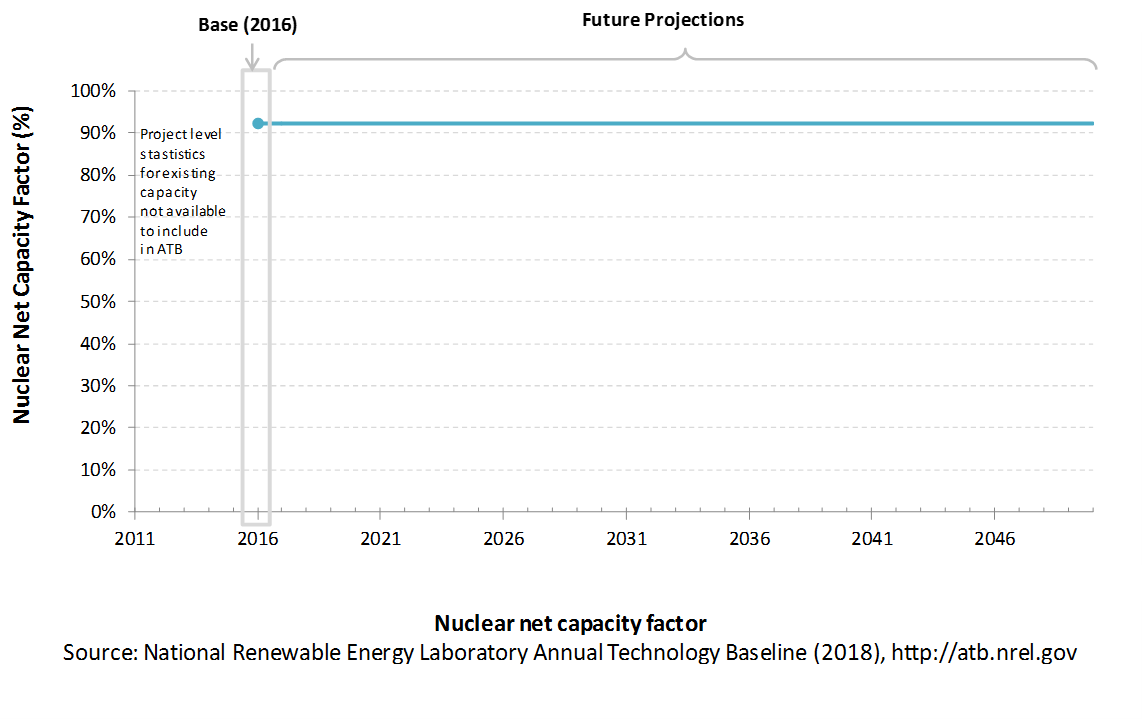 The following three figures illustrate LCOE, which includes the combined impact of CAPEX, O&M, and capacity factor projections for nuclear across the range of resources present in the contiguous United States. For the purposes of the ATB, the costs associated with technology and project risk in the U.S. market are represented in the financing costs, not in the upfront capital costs (e.g. developer fees, contingencies). An individual technology may receive more favorable financing terms outside of the U.S., due to less technology and project risk, caused by more project development experience (e.g. offshore wind in Europe), or more government or market guarantees. The R&D Only LCOE sensitivity cases present the range of LCOE based on financial conditions that are held constant over time unless R&D affects them, and they reflect different levels of technology risk. This case excludes effects of tax reform, tax credits, technology-specific tariffs, and changing interest rates over time. The R&D + Market LCOE case adds to these the financial assumptions (1) the changes over time consistent with projections in the Annual Energy Outlook and (2) the effects of tax reform, tax credits, and tariffs. 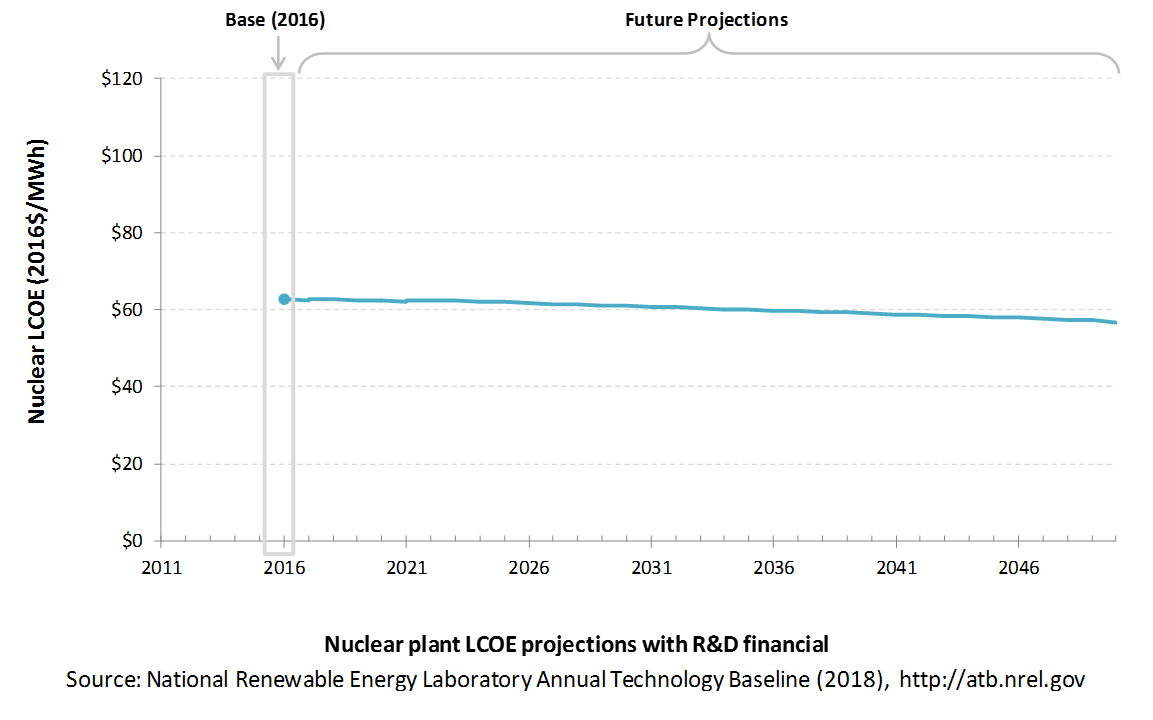 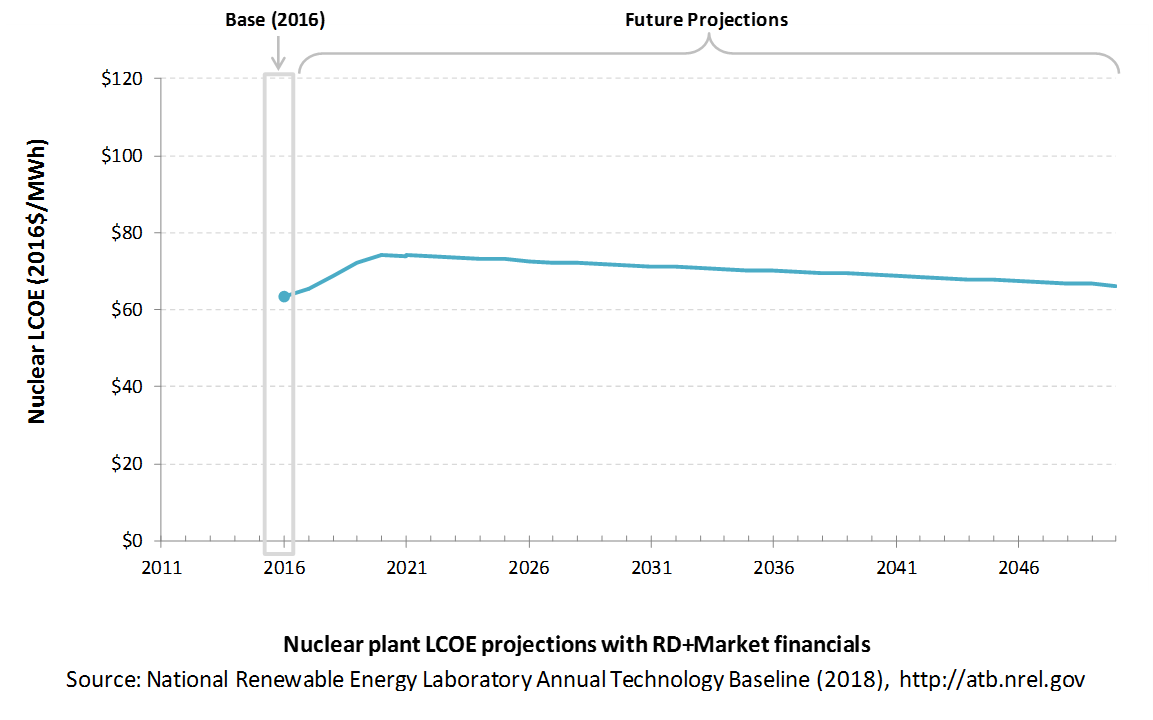