Solar resources across the United States are mostly good to excellent at about 1,000-2,500 kWh/m2/year. The Southwest is at the top of this range, while only Alaska and part of Washington are at the low end. The range for the contiguous United States is about 1,350-2,500 kWh/m2/year. Nationwide, solar resource levels vary by about a factor of two.

Distributed-scale PV is assumed to be configured as a fixed-axis, roof-mounted system. Compared to utility-scale PV, this reduces both the potential capacity factor and amount of land (roof space) that is available for development. A recent study of rooftop PV technical potential (Gagnon et al. 2016) estimated that as much as 731 GW (926 TWh/yr) of potential exists for small buildings (<5,000 m2) and 386 GW (506 TWh/yr) of potential exists for medium (5,000-25,000 m2) and large buildings (>25,000 m2). 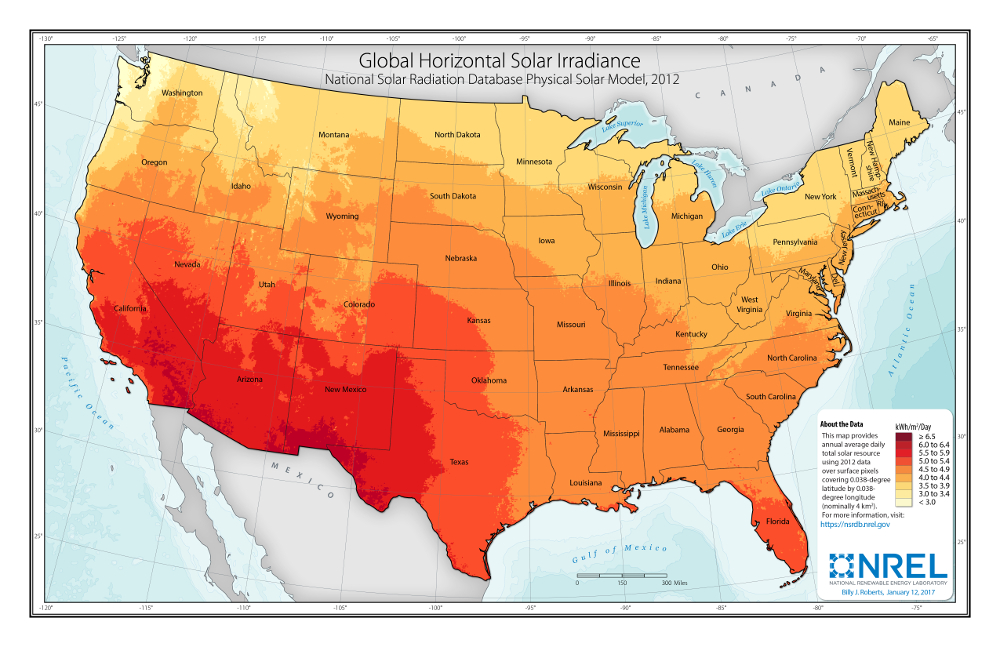 Renewable energy technical potential, as defined by Lopez et al. (2012), represents the achievable energy generation of a particular technology given system performance, topographic limitations, and environmental and land-use constraints. The primary benefit of assessing technical potential is that it establishes an upper-boundary estimate of development potential. It is important to understand that there are multiple types of potential-resource, technical, economic, and market (Lopez et al. 2012; NREL, "Renewable Energy Technical Potential").

The Base Year estimates rely on modeled CAPEX and O&M estimates benchmarked with industry and historical data. Capacity factor is estimated based on hours of sunlight at latitude for three representative geographic locations in the United States.