In 2016, the first offshore wind plant (30 MW) commenced commercial operation in the United States near Block Island (Rhode Island). In 2018, Vineyard Wind LLC and Massachusetts electric distribution companies submitted a 20-year power purchase agreement (PPA) for 800 MW of offshore wind generation and renewable energy certificates to the Massachusetts Department of Public Utilities for review and approval. In the ATB, cost and performance estimates are made for commercial-scale projects with 600 MW in capacity. The ATB Base Year offshore wind plant technology reflects a machine rating of 6 MW with a rotor diameter of 155 m and hub height of 100 m, which is typical of European projects installed in 2016 and 2017 and the turbine rating installed at the Block Island Wind Farm (GE Haliade 150-6MW).

Wind resource is prevalent throughout major U.S. coastal areas, including the Great Lakes. The resource potential exceeds 2,000 GW, excluding Alaska, based on domain boundaries from 50 nautical miles (nm) to 200 nm, turbine hub heights of 100 m (previously 90 m), and a capacity array power density of 3 MW/km2(Walt Musial et al. 2016). A range of technology exclusions were applied based on maximum water depth for deployment, minimum wind speed, and limits to floating technology in freshwater surface ice. Resource potential was represented by more than 7,000 areas for offshore wind plant deployment after accounting for competing use and environmental exclusions, such as marine protected areas, shipping lanes, pipelines, and others. 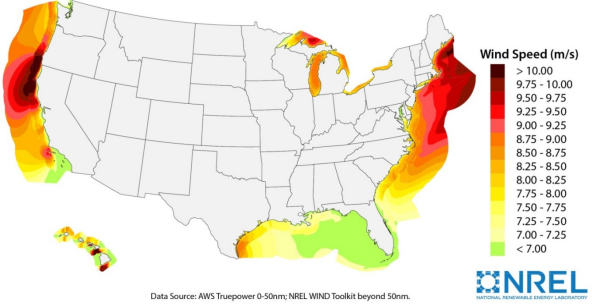 Based on a resource assessment (Walt Musial et al. 2016), LCOE was estimated at more than 7,000 areas (with a total capacity of approximately 2,000 GW). Using an updated version of NREL's Offshore Regional Cost Analyzer (ORCA) (Beiter et al. 2016), a variety of spatial parameters were considered, such as wind speeds, water depth, distance from shore, distance to ports, and wave height. CAPEX, O&M, and capacity factor are calculated for each geographic location using engineering models, hourly wind resource profiles, and representative sea states. ORCA was calibrated to the latest cost and technology trends observed in the U.S. and European offshore wind markets, including:

The spatial LCOE assessment served as the basis for estimating the ATB baseline LCOE in the Base Year 2017, weighted by the available capacity, for fixed-bottom and floating offshore wind technology. Only sites that exceed a distance to cable landfall of 20 kilometers (km) and a water depth of 10 meters (m) were included in the spatial assessment for the ATB to represent those sites only that are likely to be developed in the near-to-medium term. Long-term average hourly wind profiles are assumed and estimated LCOE reflects the least-cost choice among four substructure types (Beiter et al. 2016):

For illustration in the ATB, all potential offshore wind plant areas were represented in 15 TRGs with TRGs 1-5 representing fixed-bottom offshore technology and TRGs 6-15 representing floating offshore wind technology. These were defined by resource potential (GW) and have higher resolution on the least-cost TRGs, as these are the most likely sites to be deployed, based on their economics. The following table summarizes the capacity-weighted average water depth, distance to cable landfall, and cost and performance parameters for each TRG. The table includes the relative resource potential. Typical offshore wind installations in 2017 that have spatial and economic conditions that may lend themselves well to near-term deployment are associated with TRG 3.

Future year projections for CAPEX, O&M, and capacity factor in the "Mid Technology Cost" Scenario are derived from the estimated cost reduction potential for offshore wind technologies based on assessments by BVG Associates ((Valpy et al. 2017), (Hundleby et al. 2017)) for 2017-2032. Based on the modeled data between 2017-2032, an (exponential) trend fit is derived for CAPEX, O&M in the "Mid Technology Cost" Scenario, and capacity factor to extrapolate ATB data for years 2033-2050. The specific scenarios are: