Natural gas plant CAPEX is taken from the AEO2019 (EIA, 2019a) with the adjustments discussed in the CAPEX definition section. The ATB includes only a single CAPEX projection for each type of natural gas plant. 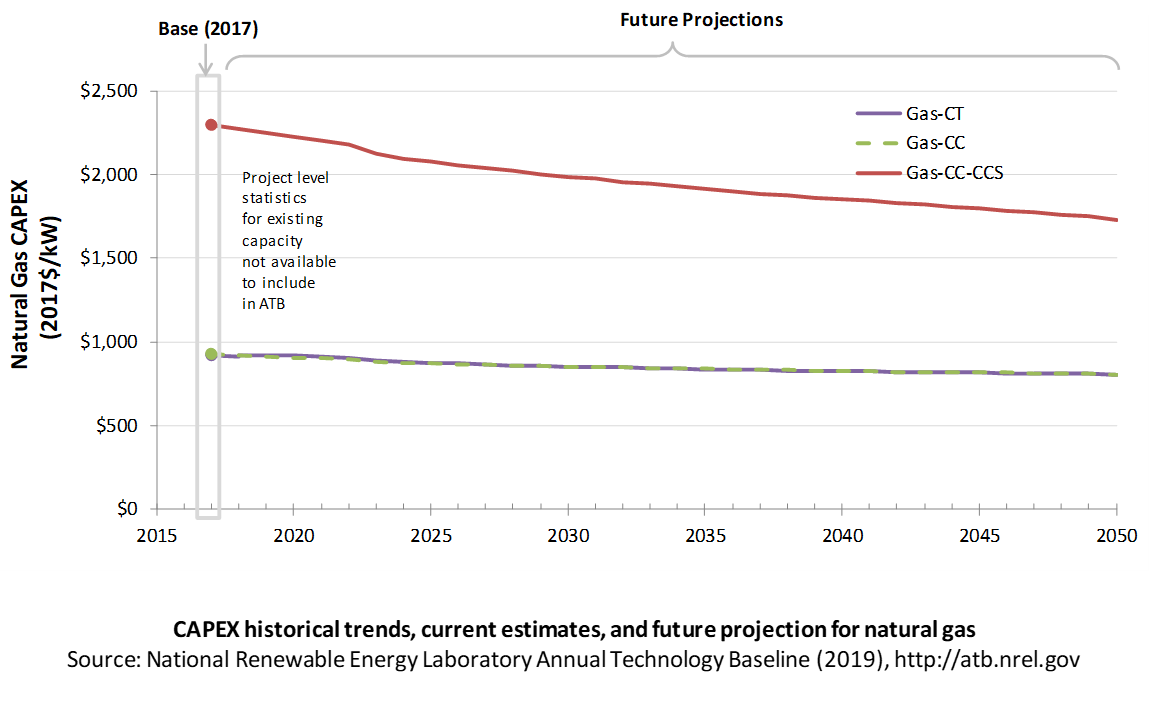 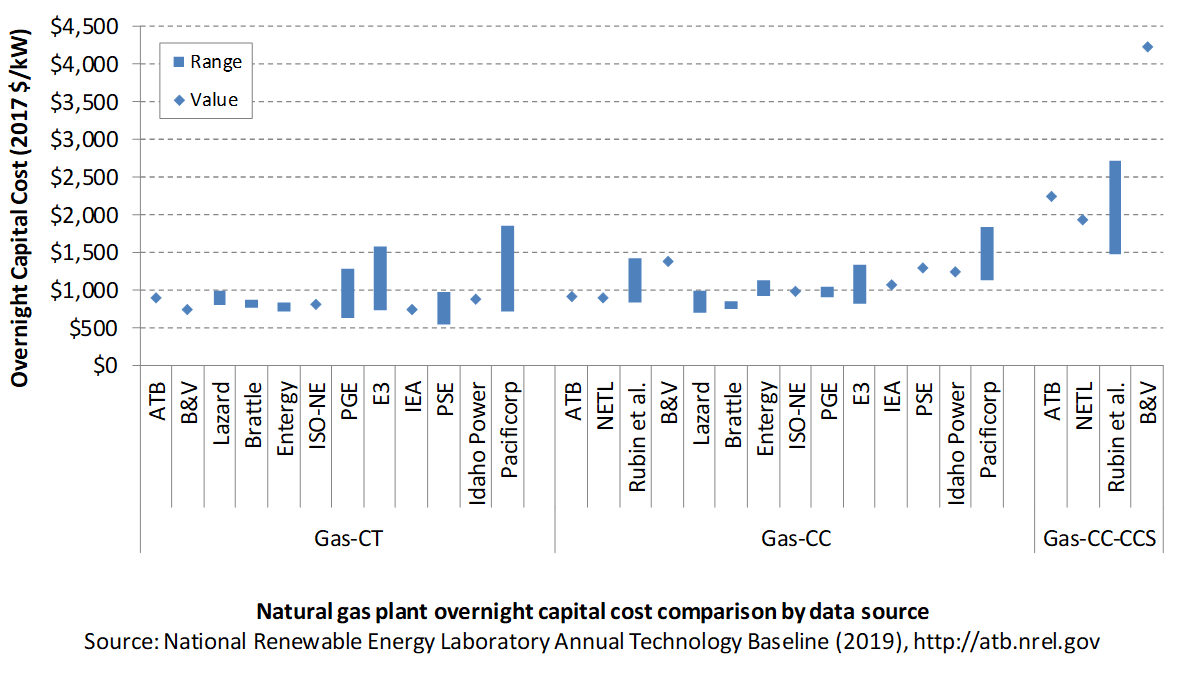 Overnight capital costs are modified from Table 123 of the AEO2019 Reference scenario (EIA, 2019a).

EIA reports two types of gas-CT and gas-CC technologies in EIA's Annual Energy Outlook: advanced (H-class for gas-CC, F-class for gas-CT) and conventional (F-class for gas-CC, LM-6000 for gas-CT). Because we represent a single gas-CT and gas-CC technology in the ATB, the characteristics for the ATB plants are taken to be the average of the advanced and conventional systems as reported by EIA. For example, the overnight capital cost for the gas-CC technology in the ATB is the average of the capital cost of the advanced and conventional combined cycle technologies from the Annual Energy Outlook. The EIA only has a single advanced technology for gas-CC-CCS, which we use as the basis for that plant type in the ATB. The CCS plant configuration includes only the cost of capturing and compressing the CO2. It does not include CO2 delivery and storage.

In the ATB, CAPEX represents each type of gas plant with a unique value. Regional cost effects associated with labor rates, material costs, and other regional effects as defined by (EIA, 2016) expand the range of CAPEX. Unique land-based spur line costs based on distance and transmission line costs are not estimated. The following figure illustrates the ATB representative plant relative to the range of CAPEX including regional costs across the contiguous United States. The ATB representative plants are associated with a regional multiplier of 1.0.

Natural gas plant fixed and variable O&M costs are taken from table 8.2 of the AEO2019, and they are assumed to be constant over time. 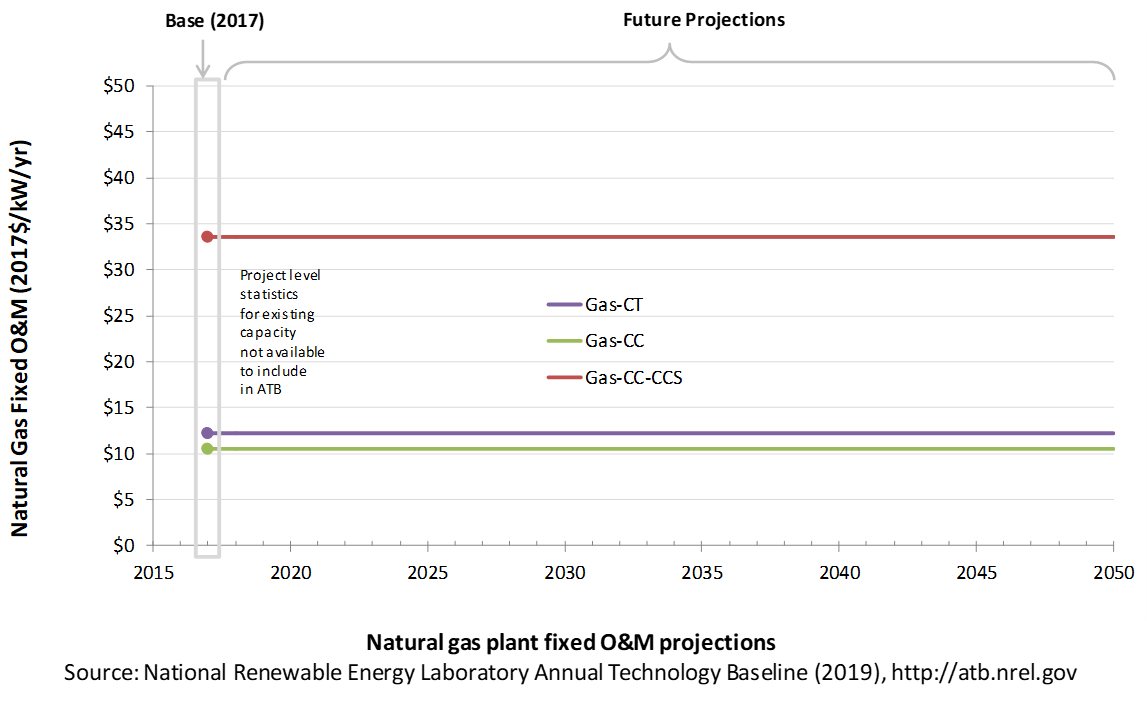 Gas-CC with CCS has not yet been built, but when built it is expected to operate as a baseload unit. 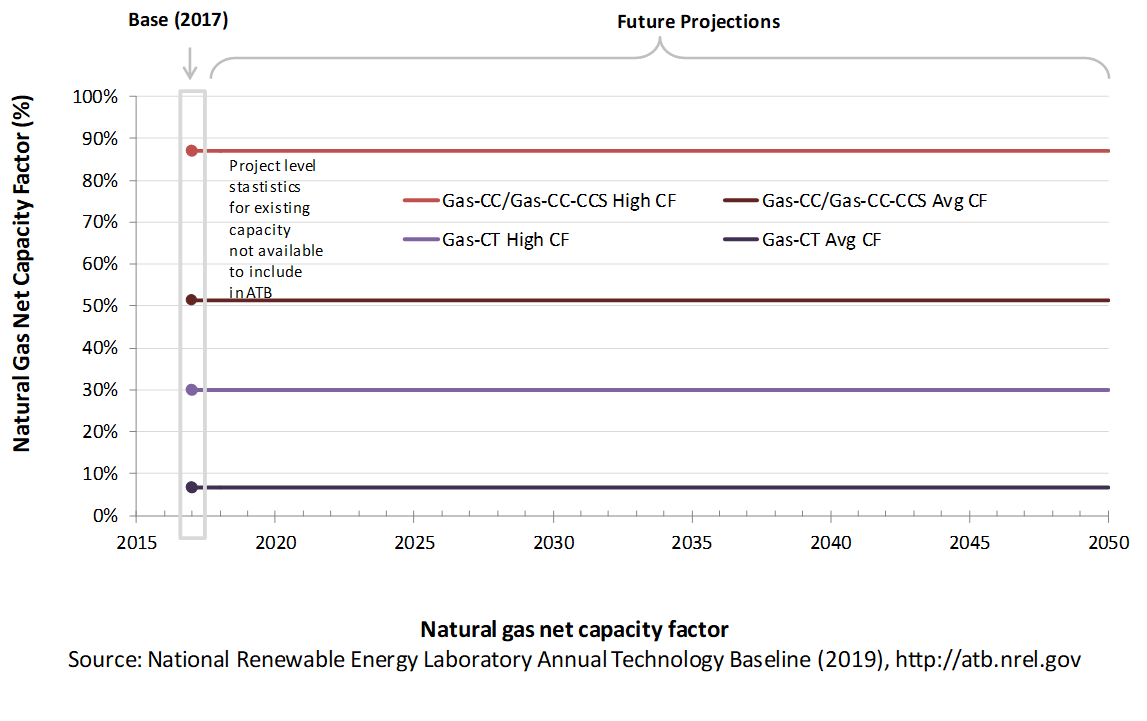 Current estimates and future projections calculated from AEO2019 (EIA, 2019a) and modified.

The following three figures illustrate LCOE, which includes the combined impact of CAPEX, O&M, fuel prices, and capacity factor projections for natural gas in the contiguous United States. For the purposes of the ATB, the costs associated with technology and project risk in the U.S. market are represented in the financing costs but not in the upfront capital costs (e.g., developer fees and contingencies). An individual technology may receive more favorable financing terms outside the United States, due to less technology and project risk, caused by more project development experience (e.g., offshore wind in Europe) or more government or market guarantees. The R&D Only LCOE sensitivity cases present the range of LCOE based on financial conditions that are held constant over time unless R&D affects them, and they reflect different levels of technology risk. This case excludes effects of tax reform, tax credits, and changing interest rates over time. The R&D + Market LCOE case adds to these financial assumptions: (1) the changes over time consistent with projections in the Annual Energy Outlook and (2) the effects of tax reform and tax credits (the 45Q tax credits are not included in this year's ATB). The ATB representative plant characteristics that best align with those of recently installed or anticipated near-term natural gas plants are associated with Gas-CC-HighCF. Data for all the resource categories can be found in the ATB Data spreadsheet; for simplicity, not all resource categories are shown in the figures; for simplicity, not all resource categories are shown in the figures. Variations in LCOE among the low, mid, and high projections for natural gas plants are driven by fuel price differences only. 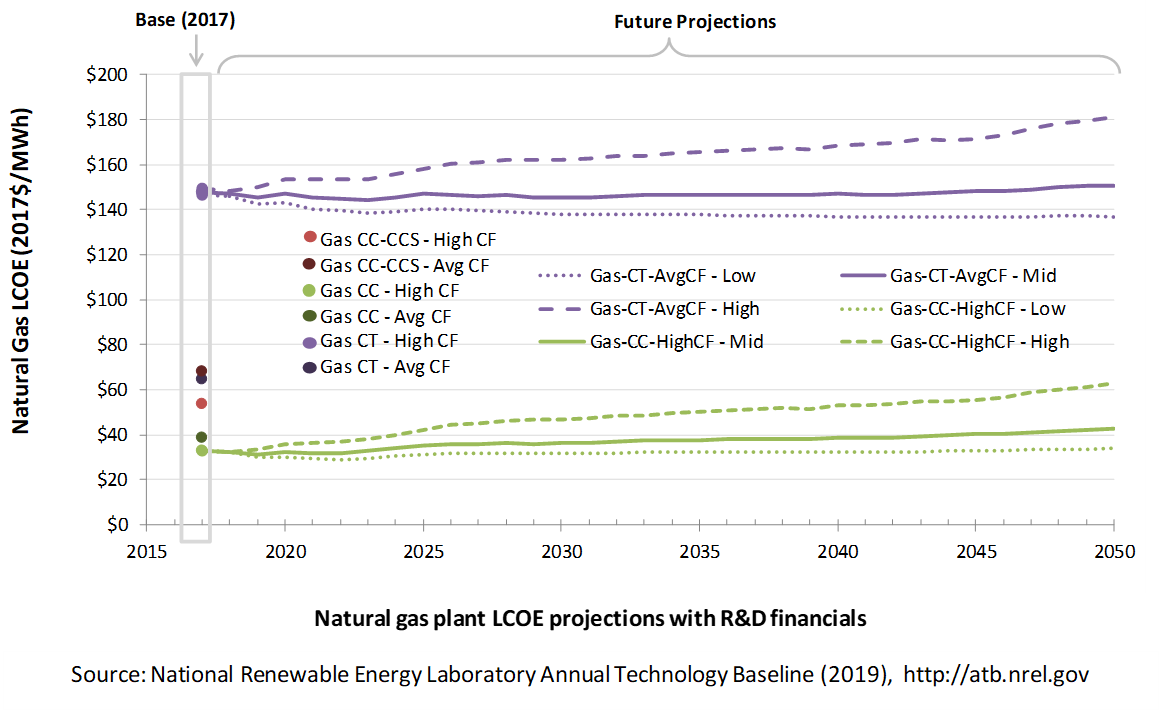 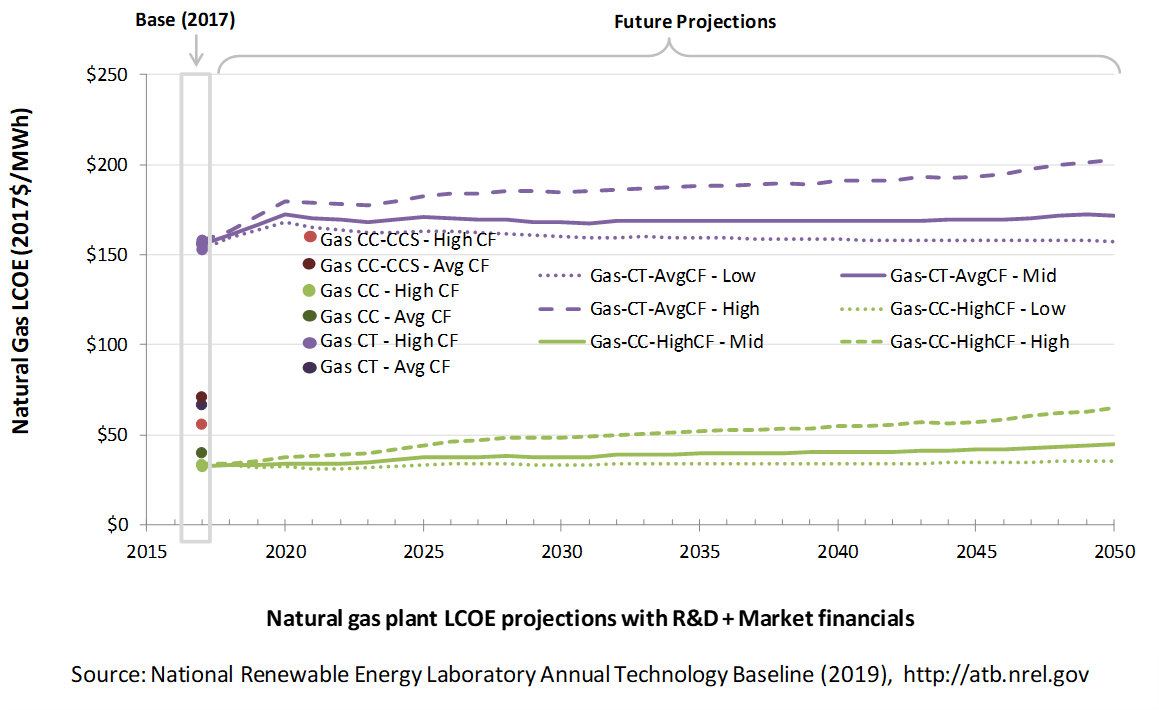 These projections do not include any cost of carbon, which would influence the LCOE of fossil units. Also, for CCS plants, the potential revenue from selling the captured carbon is not included (e.g., enhanced oil recovery operations may purchase CO2 from a CCS plant).

Fuel prices are based on the AEO2019.

LCOE is sensitive to assumptions about the financing of electricity generation projects. Two project finance structures are used within the ATB:

A constant cost recovery period-over which the initial capital investment is recovered-is assumed for all technologies throughout this website and can be varied in the ATB Data spreadsheet.